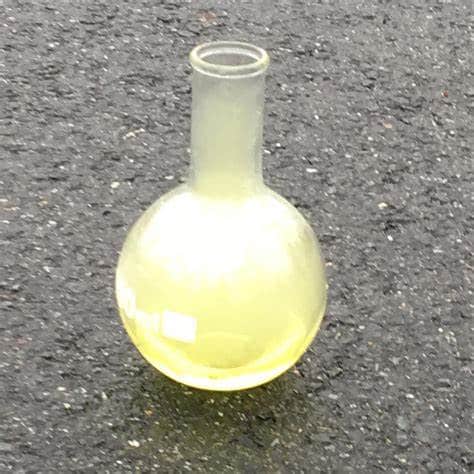 Chlorine can be a yellow or greenish color when released as a gas. Image via Wikimedia.

What does chlorine gas smell like? This is something that you and your team need to know if you are working with this halogen element. A chlorine gas leak can be hazardous indeed, and the odor of chlorine is a tell-tale sign that something is wrong at your facility. Read on to learn more about what to look out for.

The Distinctive Odor of Chlorine Gas

Chlorine gas has a very strong odor, which is one of the tell-tale signs of a leak. The smell is similar to that of ammonia or bleach and will be extremely unpleasant to anyone who comes into contact with it.

In fact, the odor itself will be more than just unpleasant — it will quickly begin to irritate the eyes and make breathing difficult. It can also irritate the skin at higher concentrations. It is crucial to take necessary precautions to prevent the release of chlorine gas and evacuate the area quickly should a gas leak occur. We’ll be taking a closer look at these symptoms and signs below.

It’s important to note that the scent of chlorine gas is very different from the traditional “chlorine smell” associated with swimming pools. This is due to the concentration of chlorine gas during a gas leak, compared to that of the chlorine gas that escapes from pool water. When chlorine is added to pool water, it bonds with small particles of bacteria to form chloramines. When these chloramines are oxidized, they are released into the atmosphere at very low levels. This is why the air around an indoor pool tends to have a chlorinated smell, but the water itself does not. In these small concentrations, chlorine and chlorine gas are relatively harmless.

If you work with chlorine gas or if you store chlorine gas at your facility, you need to be acutely aware of the risks involved. You also need to take responsibility for preventing and dealing with leaks quickly and effectively, and you will have a legal obligation to do so. Recognizing that there is a leak is the first step.

Here are seven telling signs to look out for. Some may be more obvious than others, but each one indicates that urgent action needs to be taken.

As mentioned, chlorine smells very intensely of bleach or other strong cleaning products. This is likely to be one of the first signs of a chlorine gas leak at your property or facility, as the odor is a highly distinct one.

Unlike many other types of poisonous or hazardous gas, chlorine is not colorless. Instead, the element has a yellow or greenish tinge when it is released as a gas. This coloring may not be immediately obvious, so it is important to educate your team and your staff members about the hue of chlorine gas. Instruct them to remain vigilant for any discoloration around chlorine pipelines or storage areas. As chlorine gas is heavier than the air around it, it is likely to collect in low-lying areas — another clue that will tell your team they are dealing with a chlorine leak.

Chlorine gas causes pain and irritation to the eyes. Following exposure, the eyes should be bathed thoroughly to get rid of any remaining contaminants, and medical assistance and treatment should be sought.

Remember that not all chlorine-related eye irritation will be classed as severe. However, chlorine can cause eye irritation even in relatively small concentrations, so even minor irritation should be taken seriously. If you or a member of your team experience irritation, it is worth investigating to see whether a leak has taken place.

The airways and throat passages are very sensitive to chlorine. As such, a chlorine gas leak can quickly cause burning sensations in the nose, mouth, and throat for anyone exposed. What’s more, it can cause constriction and tightness in the chest and difficulty with breathing, which can cause severe damage to health in more extreme cases.

In higher concentrations, chlorine can irritate the skin, causing reddening, blistering, or even symptoms similar to frostbite. This is a sign that chlorine gas may have leaked into the air. Remember that chlorine can also collect on clothing, so be sure to wash all clothing as well as affected areas of skin.

Chlorine can cause blurred vision or other problems with sight. This is not as telling a sign as some of the others on this list, as there are many potential sources for blurred vision, but it is still something to be aware of. If you or a member of your team experiences blurred vision, remain vigilant for other symptoms and signs or carry out a chlorine gas test for confirmation.

As chlorine reacts unfavorably with the human body, it can cause feelings of sickness and general nausea. Similar to inhibited vision, there are many potential reasons for these symptoms. So, while nausea does not necessarily indicate the presence of chlorine gas, it could be a sign that further investigation is required.

Take Steps to Deal with the Problem Quickly

Make checking for these signs a regular part of your daily operations. Doing so will enable you to act quickly to get rid of the problem before it grows worse. Remember, a chlorine gas leak is a serious hazard to health, and it is up to you to make sure that you, your team, and the general public remain protected from its effects.