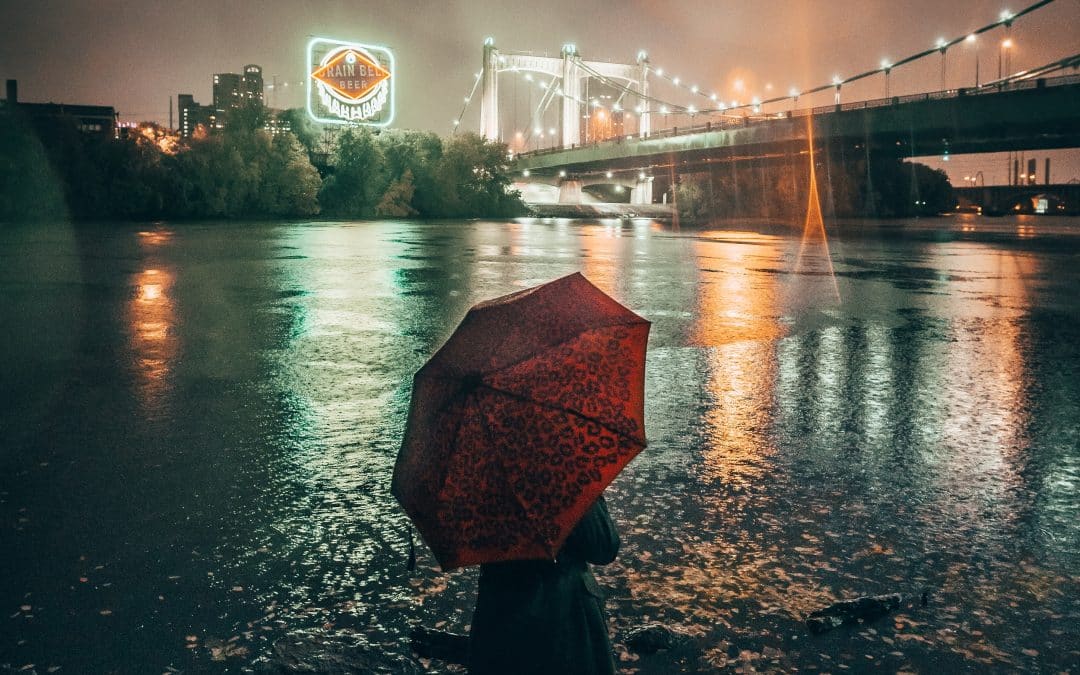 The effects of stormwater pollution and erosion can be catastrophic, and this is why storm drains and filtration solutions are so important. But what about urban and rural environments – how do the issues and solutions differ across these different types of locations?

Read on as we explore this in more detail.

Stormwater is always part of the general water cycle of evaporation, condensation, and precipitation – whether it occurs in a rural or an urban environment. However, this model is grossly oversimplified, and there are many other aspects to consider. These include infiltration of water into soils beneath the surface, percolation of water downwards through porous materials to the water table, runoff of water traveling downhill over saturated or impervious ground, or transpiration of water from trees and plants up into the atmosphere.

Additional aspects like these add to the complexity of the water cycle and also lead to wildly different journeys for stormwater in urban vs. rural environments. For example, impervious materials such as concrete all but eliminate percolation, essentially creating a new water table at surface level, which in turn contributes to overground runoff. Comparatively fewer trees and shrubs in an urban area also results in less transpiration, meaning more water reaches the ground.

Some studies suggest that around 40% of water is evaporated or transpirated before it reaches the ground in a rural setting. Meanwhile, 25% achieves shallow infiltration into the soil, and a further 25% infiltrates further, percolating deeply into the earth. Only 10% ends up as runoff.

The same studies paint a different picture in an urban setting. Here, only around 30% of water is evaporated or transpirated before it reaches the ground, and only 10% reaches a shallow level of infiltration. A further 5% will infiltrate or percolate deeper, but a substantial 55% will end up as runoff.

Of course, there are many factors involved, and different locations and other variables will result in different figures. But these numbers give us some indication of how stormwater affects rural and urban areas in unique ways.

Deploying stormwater filtration solutions for urban runoff, and managing rural stormwater challenges, requires distinct approaches. This is because the type of environment is such an influence on the eventual effects of stormwater pollution and excess water volume.

Even before we consider contamination, stormwater runoff can cause problems of its own. The mechanical movement of high volumes of water can cause significant damage, eroding building foundations and widening stormwater channels. This in turn can result in expensive harm to infrastructure and loss of civic and private property.

Flooding is also a significant concern. High volumes of water that have nowhere to go will simply build up in one place. With no outlet, rising waters can cause further damage and even loss of life. Local habitats and ecosystems can also be damaged by high water or fast-moving runoff, and these areas will need to be protected.

While these issues are problematic in both urban and rural environments, they are far more prevalent in built-up areas. As we have seen, runoff in these areas accounts for more than half of all water received during storms, compared to only around 10% in rural locations. Stormwater solutions in urban centers need to address flooding, erosion, and destruction caused by runoff, particularly as impervious surfaces increase in areas across the country.

This may be more prevalent in urban areas due to the numerous chemicals used and disposed of in urban environments, and also due to the increased proportion of stormwater runoff in these areas. However, pollution is still a concern in rural areas too. Depending on where they are deployed, stormwater drain solutions will need to be equipped to deal with different types of pollutants.

Research into urban streams, suburban streams, and rural streams has found a range of highly specific pollutants in each. Urban water streams feature the highest biochemical oxygen demand (BOD), as well as the highest levels of total suspended sediment and orthophosphates. Stormwater filtration systems for urban runoff will need to be equipped to deal with this. Rural streams, on the other hand, display the highest level of organic carbons, and solutions in rural areas will need to be designed with this in mind.

While the weather conditions leading up to the sampling did have an effect, in general, excessive fecal coliform abundance was most often detected in urban environments, and may be washed into local water tables through street water drains and other outlets. It’s not enough simply to deploy drainage systems and hope for the best – the particular effects of stormwater pollution in different environments must be taken into account.

A hybrid approach to stormwater management and drainage is important, partly because rural locations are becoming increasingly ‘urbanized’. This does not mean they are being absorbed into nearby towns and cities – although this is happening in suburban environments – but rather that urban building techniques and materials are being used in rural spaces too.

Farms and agricultural facilities, for example, may deploy concrete and other impervious materials. This can cause traditionally urban issues such as flooding, excessive erosion, and increased levels of surface water runoff – issues that will need to be addressed during development and construction projects in rural areas.

The basic principles of stormwater management are similar in urban and rural environments – in both cases, we need to reduce the level of contamination and mitigate the effects of erosion and water buildup. However, specific approaches are required to ensure that our responses to stormwater are efficient and effective, across all urban, suburban, and rural locations.