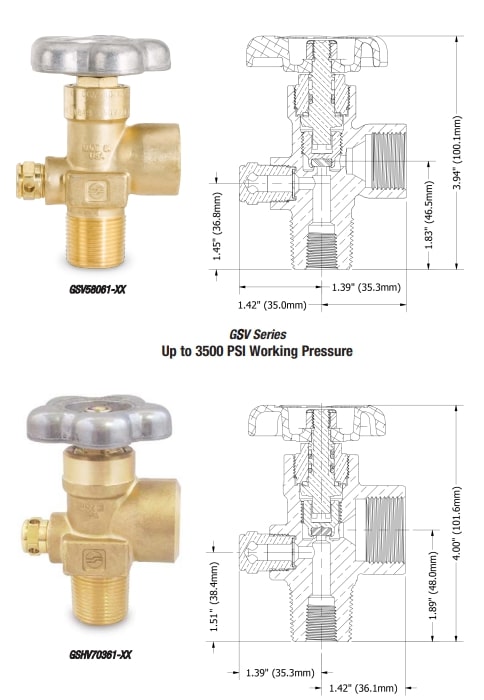 Designed for use in every country around the world, our Global Industrial Gas Valve, the GSV Series is designed to meet the newest revision of ISO 10297 and CGA V-9. For use in cylinders containing inerts, oxidizers and flammables. 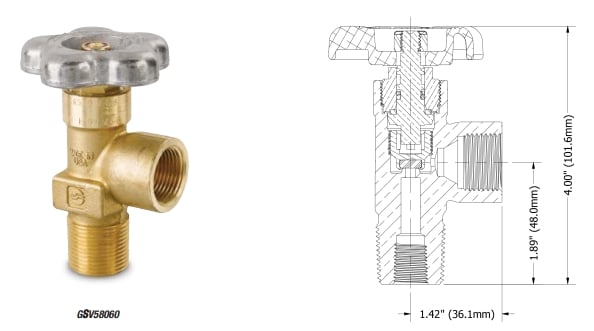 Retractable Pin Adapters provide maximum operating flexibility to fill or evacuate a cylinder with either a conventional valve or a GSRPV. Engage the Pin Locking Tool (see below) and rotate the tool clockwise to depress the pin for use with a conventional valve. Or rotate the tool counterclockwise to release the pin for use with a GSRPV valve. The adapters incorporate an O-ring seal for a hand-tight connection.

Gas cylinders can be checked for content integrity by simply inserting the Checking Rod and pushing against the resistance of the check valve. The sound of escaping gas indicates residual cylinder pressure.

*Adapters can be used with TV RPV and GRPV also. 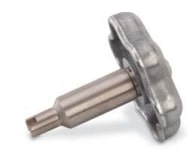 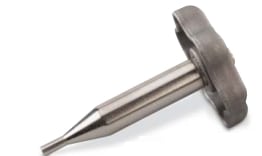 GSV MRI Series Global Valves for Use in MRI Environments 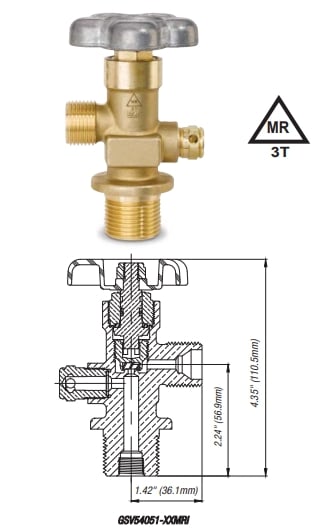 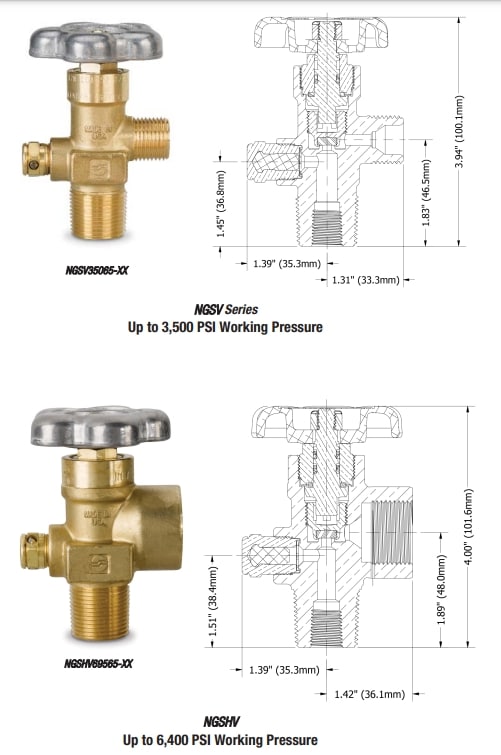 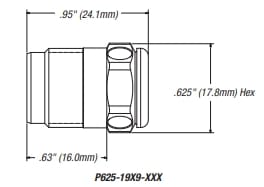 Almost all compressed gas containers are fitted with pressure relief devices. A pressure relief device is a pressure- and/or temperature-activated device used to prevent the pressure from rising above a predetermined maximum, and thereby prevent rupture of a normally charged cylinder when subjected to a standard fire test as required by Title 49 of the U.S. Code of Federal Regulations (49CFR 173.34(d)), or equivalent regulations of Transport Canada.
The Compressed Gas Association, in pamphlet CGA S-1.1, has classified pressure relief devices according to type using the letter designation CG followed by a numeral. Each of these types described are in the following subsections (reference CGA S-1.1).

Type CG-1 (Pressure Relief Rupture Disk)
A rupture disk (synonymous with the name burst disk within the industry) is a pressure-operated device which affords protection against development of excessive pressure in cylinders. This device is designed to sense excess
pressure in a cylinder and will function when the cylinder is of sufficient magnitude to cause the rupture or bursting of the rupture disk element, thereby venting the contents of the cylinder. The rupturing of the rupture
disk element results in a non-reclosing orifice.

One of the most common types of rupture disk devices consists of a gasket and a rupture disk and a rupture disk holder. These components are only supplied as factory-assembled devices designed to be replaced as a unit. The gasket is the part which provides the proper seal to prevent leakage of the cylinder contents past the rupture disk assembly and may be constructed of metallic or nonmetallic materials.

The rupture disk is the operating part of the pressure relief device and, when installed in a proper rupture disk holder, is designed to burst at a predetermined pressure to permit discharge of the cylinder contents. Such disks are usually made of metallic materials and may be of flat, preformed, reinforced, grooved or scored construction. Nonmetallic materials are also used for specific applications.

The rupture disk holder is the part of the pressure relief device which contains the opening, against which the rupture disk mates. The rupture disk holder usually also contains the discharge porting or passages, beyond the operating parts of the device, through which fluid must pass to reach the atmosphere. In many cases, the discharge holder is provided with radial vent holes through which the fluid in the cylinder vents to the atmosphere. This radical discharge design provides an anti-recoil feature, which minimizes rocketing of compressed gas cylinders during discharge of the contents through the pressure relief device. Other types of discharge ports may also be provided in rupture disk holders to suit specific application requirements.

Most rupture disk devices are designed with holders having either sharpedged or radius-edged orifices to which the rupture disk mates. The sharpedged orifice produces a shear-type actuation mode whereby the disk ruptures in shear, producing a characteristic leaf-type configuration after functioning.

The radius-edged orifice produces a tension-type actuation made whereby the disc stretches over the radius-edge. This thins the center of the disc until it can no longer hold the pressure. This type of rupture produces a characteristic rose petal configuration after functioning.

Since the actuation modes of each type of holder described above are completely different, it is important that only original manufacturer’s assemblies be used in the replacement of rupture disk devices.

WARNING The pressure relief rupture disk device is a primary safety component and hence the following precautions should be noted and adhered to:
A. Only trained personnel should be permitted to service pressure relief devices
B. Tightening of the rupture disk assembly to the cylinder valve or to the cylinder itself should be in accordance with the manufacturer’s instructions. Tightening to a torque less than the manufacturer’s recommendations may result in a leaking device or a device that may rupture at a lower pressure than specified. Conversely, over tightening can also result in disk actuation at a lower pressure than specified due to excessive twisting action, which may create wrinkles or distortions in the disk, which may cause premature failure of the disk and inadvertent release of the pressure contents. Either of these premature releases could cause serious injury or death.

A rupture disk is a non-reclosing device. Once the disk has ruptured, there is no way to prevent the complete release of the contents of the cylinder. This device does not provide good protection against pressures caused by exposure to excessively high temperatures when the cylinder is only partially charged. The pressure rise may not be sufficient to actuate the rupture disk before the cylinder loses its integrity and weakens.

Consideration should be given to environmental conditions to which the cylinder may be exposed. Severely corrosive atmospheres may contribute to premature rupture of the disk. To prevent corrosion of the rupture disk, care must be taken to select materials of construction that do not interact with either the contents of the cylinder or the anticipated environmental conditions.

WARNING No attempt should be made to repair fusible plug devices. They are not repairable and attempts to repair will destroy the integrity of the fusible alloy causing leakage of gases that may lead to fire, personal injury or death.

Limitations:
Since the fusible plus is a thermally operated device, it is designed to function only when the fusible metal melts out. Hence, it does not protect against over pressure from improper charging practices. Sufficient heat to melt the fusible alloy is necessary for proper functioning of this type of device. Therefore, the location of such devices is an important consideration.

Industry practice limits the application of these style fusible plugs to cylinders with 500 psig (3447 kPa) service pressure or less to minimize the possibility of cold flow or extrusion of the fusible alloy. A fusible device is a
nonreclosing devices and when it functions, it releases the entire contents of the cylinder.

NOTE: The same precautions noted for CG-1 devices should be adhered to for CG-4 and CG-5 device. See previous warnings.

Limitations:
CG-4 and CG-5 combination devices function only in the presence of both excessive heat and excessive pressure, and sufficient heat must be present first to melt the fusible metal. Therefore, this device does not offer protection against over pressure from improper charging practices.

Type CG-7 (Pressure Relief Valves)
A pressure relief valve is a spring-loaded pressure-operated device designed to relieve excessive cylinder pressure, reclose, and reseal to prevent further release of product from the cylinder after excessive pressure is removed and valve resealing pressure has been achieved.

The primary advantage of using the pressure relief valve is that functioning of this type of device may not release all of the contents of the cylinder but is designed to reseal after resealing pressure has been achieved. This characteristic, in fire conditions, will minimize feeding the fire in the case of flammable or combustible cylinder contents.

Limitations:
Pressure relief valves are designed to maintain the pressure in the cylinder at a limit as determined by the spring force. Therefore, such devices do not protect the cylinder against possible rupture when continued application of external heat or direct flame impingement weakens the cylinder wall to the point where its rupture pressure is less than the operating pressure of the relief valve.

If you require assistance in selecting a Pressure Relief or Safety device for a specific application, please contact Sherwood Customer Service at 888-508-2583 with the following information: Part number of the valve assembly being repaired, if applicable; Type of gas service in which cylinder will be used; and service or test pressure of the cylinder. 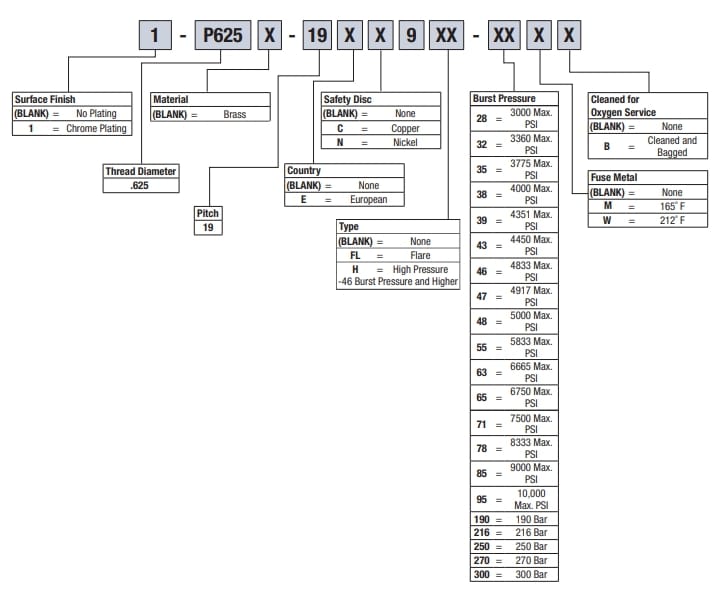 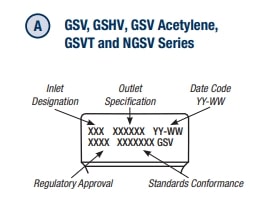 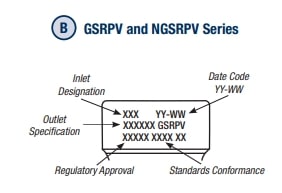 DOs and DO NOTs for Valve Use

DOs
Proper care of compressed gas cylinder valves includes (but is not limited to) the following:

DO NOTs
This list is not intended to be comprehensive. The user is cautioned to review maintenance activity with the valve supplier before beginning work if there is any uncertainty on the part of the user. Proper care of compressed gas valves includes the following: 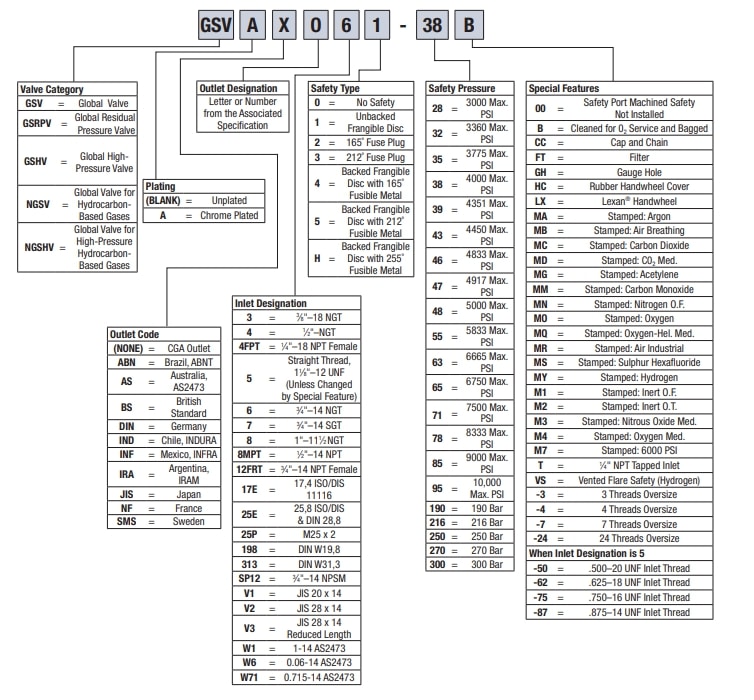 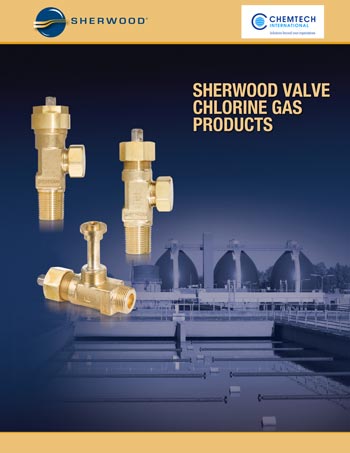 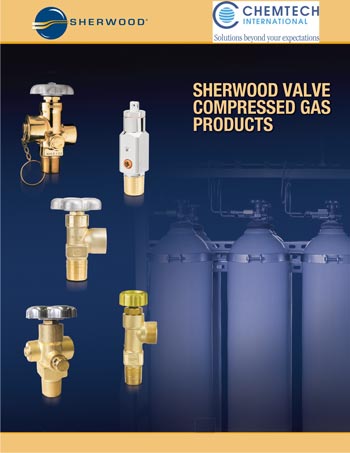 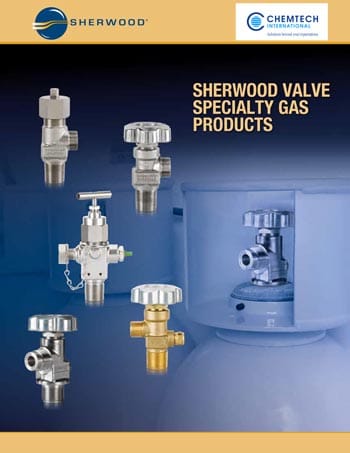